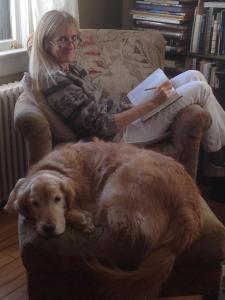 Reflections from Sara on the evolution of her life as a writer:

As a writer, I have followed a meandering path, and have had many adventures along the way.

I was raised in Asia and Europe as the daughter of a spy. That was adventure in itself. After and whilst earning degrees in psychology, social work, and human development at Carleton College, University of Washington and Harvard respectively, I followed my curiosity down a number of enticing trails. I had loved writing from the time I was small, (I copied books in second grade, wrote sappy poetry as a teenager, and actually liked writing those autobiographies for university applications,) but I didn’t think one was allowed to be a writer, and so, for quite a while, I pursued other occupations that stirred me. I carried out biological studies of whales in Patagonia, did psychiatric social work with disadvantaged children in Boston and San Jose, studied the lives of farmers in remote corners of the world, and became a university professor. Along the way I had two children. I enjoyed the academic and professional writing I did in these various fields—I loved inquiring into and writing about the joys and struggles entailed in being human—but, more and more, I found I wanted to evoke life rather than just report on it, and wed art to observation. The absorbing delight I felt in playing with language and describing experience prevailed. And, at last, I turned my sights to creative nonfiction writing.

Since that turning, I have published two memoirs: Born Under an Assumed Name: The Memoir of a Cold War Spy’s Daughter and Black Water and Tulips: My Mother, the Spy’s Wife, a Mother-Daughter Memoir. These recount, from different angles, my exotic and challenging childhood spent overseas in a world of espionage. I have also authored two books of literary journalism sparked by my passion for exploring far-off people and places: Dusk on the Campo: A Journey in Patagonia and Bread of Three Rivers: The Story of a French Loaf.  In addition to these works, I have written two guides for writers: To Write the Past: A Memoir Writer’s Companion, Chance Particulars: A Writer’s Field Notebook. Another publication, Of Many Lands: Journal of a Traveling Childhood, is a memoir writing guide for young people who grew up abroad as I did. My memoirs, essays, and commentaries have been published in national literary magazines such as The American Scholar, newspapers such as the Washington Post, and produced for Public Radio’s All Things Considered.

I have taught writing for over twenty years at The Writer’s Center, the wonderful literary hub of the nation’s capitol. I have offered writing workshops, as well, at Johns Hopkins University and Vermont College of Fine Arts; New Directions, a writing program of the Washington Baltimore Center for Psychoanalysis; and through private seminars in the U.S. and abroad. Recently, I have designed, led, and trained others to lead, “Writing for Resilience” workshops designed to help health care workers and staff of NGO’s process the traumas inherent to their work.

I have worked for two decades as an independent editor and writing coach, editing hundreds of manuscripts and supporting scores of people as they have brought their words to the page and their stories to the world.

Along with my literary work, I have maintained a small psychotherapy practice. It has been a great honor to accompany others as they seek to create joyful and flourishing lives.

I live in the Washington D.C. area. For fun, I like to walk in the woods, bake chocolate cakes and other confections, and create boxes and books using the French craft of cartonnage. In the last decade I have discovered a new source of delight:  exploration of life’s big questions through conversation and reading of classics from around the globe.